Of course we cannot always share details about our work with customers, but nevertheless it is nice to show our technical achievements and share some solutions.

In a usual ELK setup, one would run application servers logging to a central Logstash server and this Logstash writes log events into an Elasticsearch index.

Once upon a time: logstash-forwarder

A couple of years ago, the logstash-forwarder project was created to solve exactly this: Pick up logs and forward them to one or more Logstash servers "listening for our messages".

However logstash-forwarder was replaced by Filebeat:

The filebeat project replaces logstash-forwarder. Please use that instead.

Interestingly this project was renamed from "lumberjack" to "logstash-forwarder" as can be read in the README:

We'll come back to the lumberjack name later again...

So if Filebeat should be used instead, is there an actual logstash-output-filebeat plugin available? No, there isn't (as of this writing). The idea behind using Filebeat as a forwarder to another Logstash server would be for the local Logstash to write local logs into files. These files are then picked up by Filebeat and sent to the central Logstash server.

Sounds messy? It is. Not only will you lose time by writing disks to log (by Logstash) and reading them again (by Filebeat), it also means to install a second daemon (Filebeat) which uses resources on that local Logstash server.

It would surely work, but do we really want to involve another daemon? Nope.

The challenge now is to find the right Logstash output plugin. Sure, there are the basic tcp and udp output plugins, which simply connect to a Logstash listener on the given port - but is that the right choice?

Going through the list of Logstash output plugins, one name catches the eye: lumberjack.

Wait, wasn't lumberjack the original name of the logstash-forwarder? A quick read in the lumberjack output plugin documentation doesn't really show a use case for this output, but it's certainly worth a try. 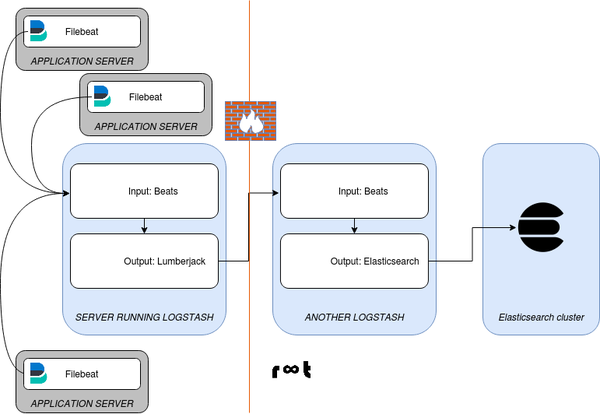 Move both files into /etc/logstash/ and configure a new beats input with the paths to these files:

On the sending side, our "local" Logstash, the lumberjack output can be defined, using the same SSL certificate: